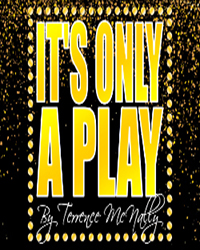 It's Only a Play

A wealthy first-time Broadway producer is throwing an opening night party for The Golden Egg at their luxurious Manhattan home. The playwright, director, a lead actor, and assorted friends and hangers-on (including a critic) are in attendance. As they nervously await the late-night reviews, they gossip and name-drop celebrities who are in attendance at the show and chat about their respective theater experiences. The star of the show is taking drugs. An old friend of the playwright is relieved and secretly thrilled about the bad reviews that arrive. And, although Ira Drew is a theater critic, he is very critical of the theater because he has no talent to actually participate, despite his secretly writing plays. Written by four-time Tony award winner, Terrence McNally. It's Only a Play is a celebration of theatre at its best...and theatre people behaving at their not-so-best. Not recommended for children ages 15 and under.